Thank you for subscribing Girls und Panzer: Global Operation English version mod!
Current version: Released on December 30, 2021
Supported game version: v1.11.*
If you like this MOD, please also give some support for the Chinese version:
https://steamcommunity.com/sharedfiles/filedetails/?id=2353307396

No Step Back DLC is necessary

●Recommend the historical national focus, but it is not necessary. There are fewer tests for non-historical national focus. I will try to be compatible with multiple situations. Fun first
●About the CTD issue, it is related to Armor Pack DLCs ,and it has been posted in the Discussion
●Recommended to play this mod with GuP music pack mod:
https://steamcommunity.com/sharedfiles/filedetails/?id=1220796079

●You don’t have to subscribe the Original Chinese version , This is not a Submod
●Because of the large amount of text and insufficient development members, most English translations have adopted the Google Translate + partial manual correction method to correct the names of characters. There will be lots of grammatical errors (especially in events), but it does not affect the understanding of the general meaning

When the Girls und Panzer meets Heart of Iron IV

Girls und Panzer: Global Operation is a story-oriented mod for Heart of Iron IV. The story takes place in Japan in 1936, when the Oarai Girls Academy had just defeated the university team and thus saved the school ship. But in the face of the increasingly turbulent international situation, it is difficult for Oarai and even the Sensha-do Federation to survive in this environment, let alone the Ministry of Education and the imperial government behind it…
Players can play the role of the Sensha-do Federation in the game, which is a consortium composed of the Sensha-do departments of various universities and has the world’s leading tank technology and tactics at that time. As the leader of the World Sensha-do Movement, the Sensha-do Federation is ready to launching a full-scale blitzkrieg to defeat their opponents and bring death and terror happiness and joy to the world. And now what they need most is your leadership.

●Brand new power: Sensha-do Federation
●The cabinet and generals include almost all the characters in " Girls und Panzer "
●Oarai, Pravda, Saunders and St. Gloriana, Kuromorimine, Chi-ha-tan, five paths and unique national focus trees are waiting to be explored
●400+ Events, dozens of characteristic decisions
●Rich plot, with a total of 120,000+ words of text distributed in several branches, experience the ups and downs of the characters from the bits of life, and witness the growth of girls
●Interact with girls♀
●Diversified expansion methods, manipulating the tank to push? Or there are other ways
●Original collection gameplay: complete tasks to collect beautiful pictures
●Super event
●There are other new elements… 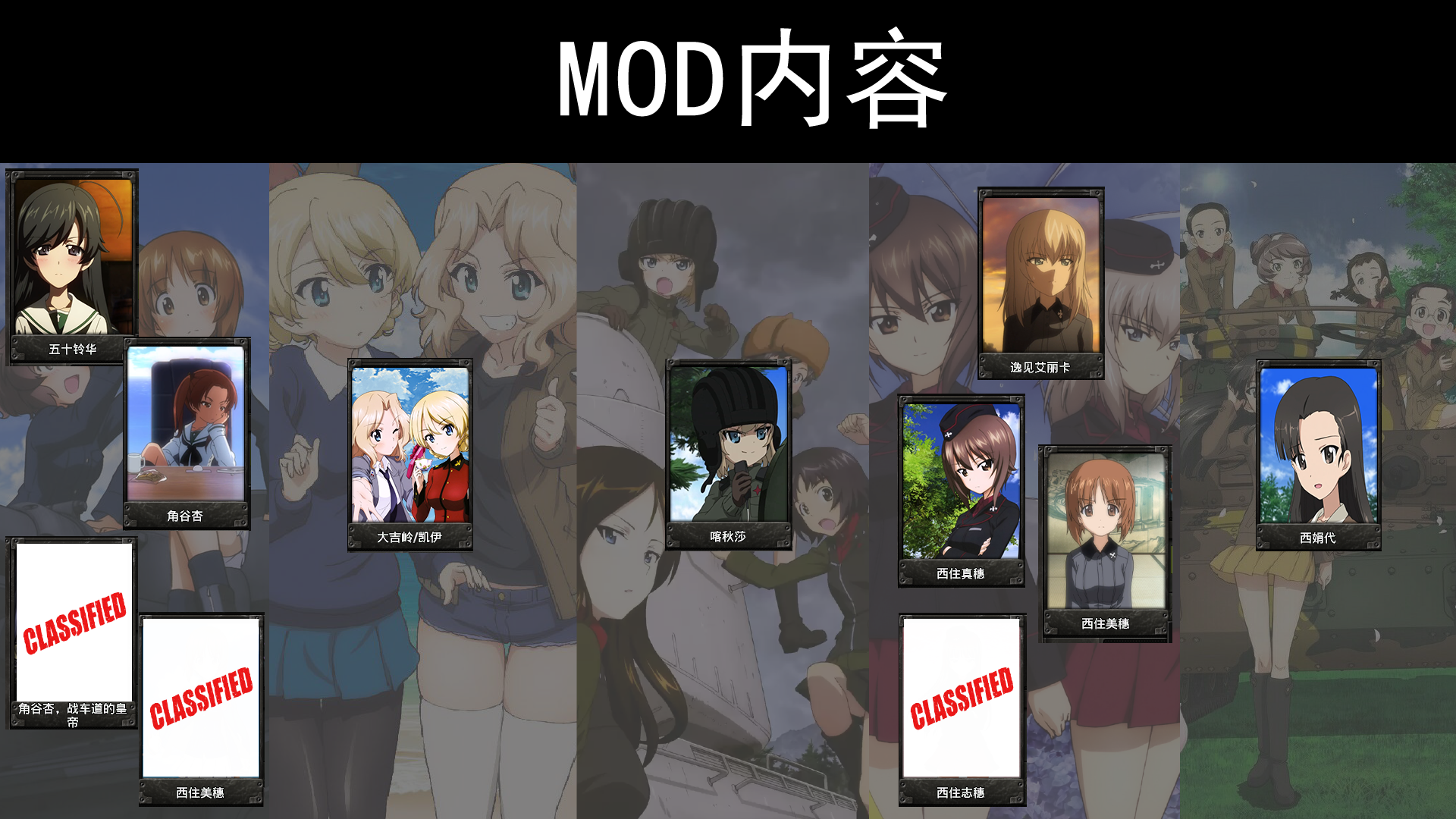 Oarai path: Is the reform of the student union or Isuzu Hana’s new team, or is it an accident that Anzu tries to take over power?
Kuromorimine path: Erika will choose from three reform options, and then spread the Sensha-do to Germany, or choose one of the two sisters and advance carefully by the abyss.
Pravda path: Does Katyusha rely on Nonna’s help or do she hold power by herself? What kind of connection is there between Pravda and Trotsky? Can a whole new pattern be opened?
St. Gloriana / Saunders joint path: the two schools move forward hand in hand, witness the love between girls, defend democracy in the American Civil War, and block black tea in Britain!
Chi-ha-tan path: Ascend to the stage of history in a dramatic way and start a very challenging conquest!
Endgame crisis (can be turned on or not in the game): Usher in the final battle in the late game!

The mod has been basically completed. If you encounter any game-related bugs, please leave a message on the mod page, and the author will reply in time.

The MOD will always keep adapting to the new dlc of the game!

These DLC should be installed in order to use this item.